“Impeccable timing and a choreographic arc that made each point but never overstayed the moment made evocative, organic statements.”
~Lou Fancher, San Francisco Classical Voice, October 19, 2016

“Dancers roll on the floor, arch over the arc of a rolling wheel, fall and rise, and mix aggressive gestures with Butoh-like specificity, creating evocative imagery in each passing moment.”
~Claudia Bauer, East Bay Express, November 3, 2010

““Ame to Ame,” a title that plays on the Japanese homophones for “candy” and “rain,” tilts off of Butoh clichés into a more diverting realm. All in white amid a like-colored chair, stool, and table, the girlish Yuko Kaseki and the top-knotted, shirtless Shinichi Iova-Koga negotiate high-contrast switches between the anguished grimaces of Butoh past and the physical comedy of the silent era—manic chases, sleepwalking, and furniture pulled out from under. Theirs is a quirky romance, and its tender moments culminate in a drunken waltz.”
The New Yorker, 2009

“the inkBoat ensemble, and especially director Shinichi Iova-Koga, whose “c(H)ord” premiered Thursday night at the Yerba Buena Center for the Arts, are remarkably adept at generating simple images that you just can’t get out of your head.”
~Mary Ellen Hunt, SF Chronicle, April 26, 2008

“the friction between the deceptively, mulishly passive Mr. Koga and the slyly assertive Ms. Terman was delicately funny, revealed in a simple walk across the stage or a contretemps over a folding chair and a noisy radiator.”
~Jennifer Dunning, New York Times, January 9, 2006

“Iova-Koga somehow contorted into a ball, his arms move with such deliberate individuality that they look like worms sprouting from an eerily headless torso.”
~Rachel Howard, San Francisco Chronicle, January 26, 2007

“…technical mastery and dark vein of humor runs through the performances…”
–Voice of Dance, August 10, 2004

“The U.S. premiere of [inkBoat’s Ame to Ame is] operatic in its own way. While the only libretto was a panoply of keen gestures, extreme facial expressions, and Harpo-style physical maneuvers, the dancers’ bodies sang out the physical equivalent of songs—broken, dissonant, and often hilarious. Although there was no translation of these nonverbal arias, the dancers formed a portrait of mysterious yearning and frustration that was by turns comic, lyrical, ghoulish, and haunting.”
~Ann Murphy, Dance Magazine, August 12, 2004

“Hiding under mounds of a gorgeous fabric cloak, Iova-Koga softly blew a white kerchief from his face and peaked out curiously. A charming presence, he was rooted but levitating; within this tiny gem of a dance a path from dark to light moved like a stream. Eventually, letting down the burden of his cloak, he stomped on it as he turned in a slow circle. I overheard an audience member say “I want to marry that dance.””
~Alissa Cardone, The Brooklyn Rail

“Shinichi Iova-Koga has given us a solo performance that digests the horror of warfare and transforms it into a thing of hope.  A riveting performer of great skill and craft, Iova-Koga embodies the spirit of protest.”
~Sima Belmar, SF Bay Guardian

“But much like the unexpected humor in Kafka’s stories, these events trigger a quick chuckle, then an uneasiness sets in, which mirrors the dying man’s uncomfortable metamorphosis into frog, lizard, snake, insect….”
~Sam Prestiani, SF Weekly, 2001 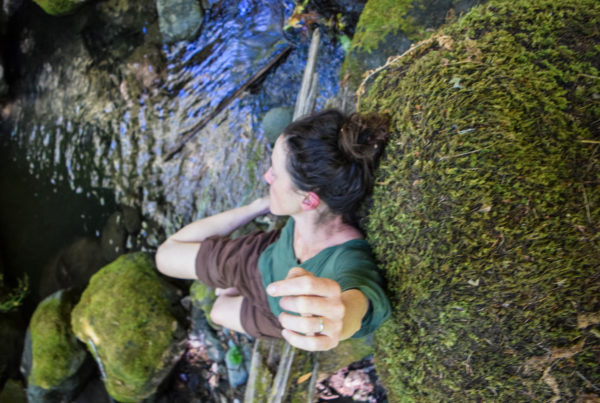 Shinichi and Dana Iova-Koga…. came together through a mutual love for connecting the dancing body with nature. Dana graduated from NYU’s Experimental Theater Wing, and Shinichi was the son of…

Review by Claudia Bauer What’s in a name? AXIS, the name of Oakland’s renowned physically integrated contemporary dance company, plays on the turning axes of wheels and on accessibility; before…

Deep in the middle of the performance of “95 Rituals,” as you find yourself on the back of a dancer who is clambering over benches on the upper deck of…