Reflections on ODD by Alice Sheppard 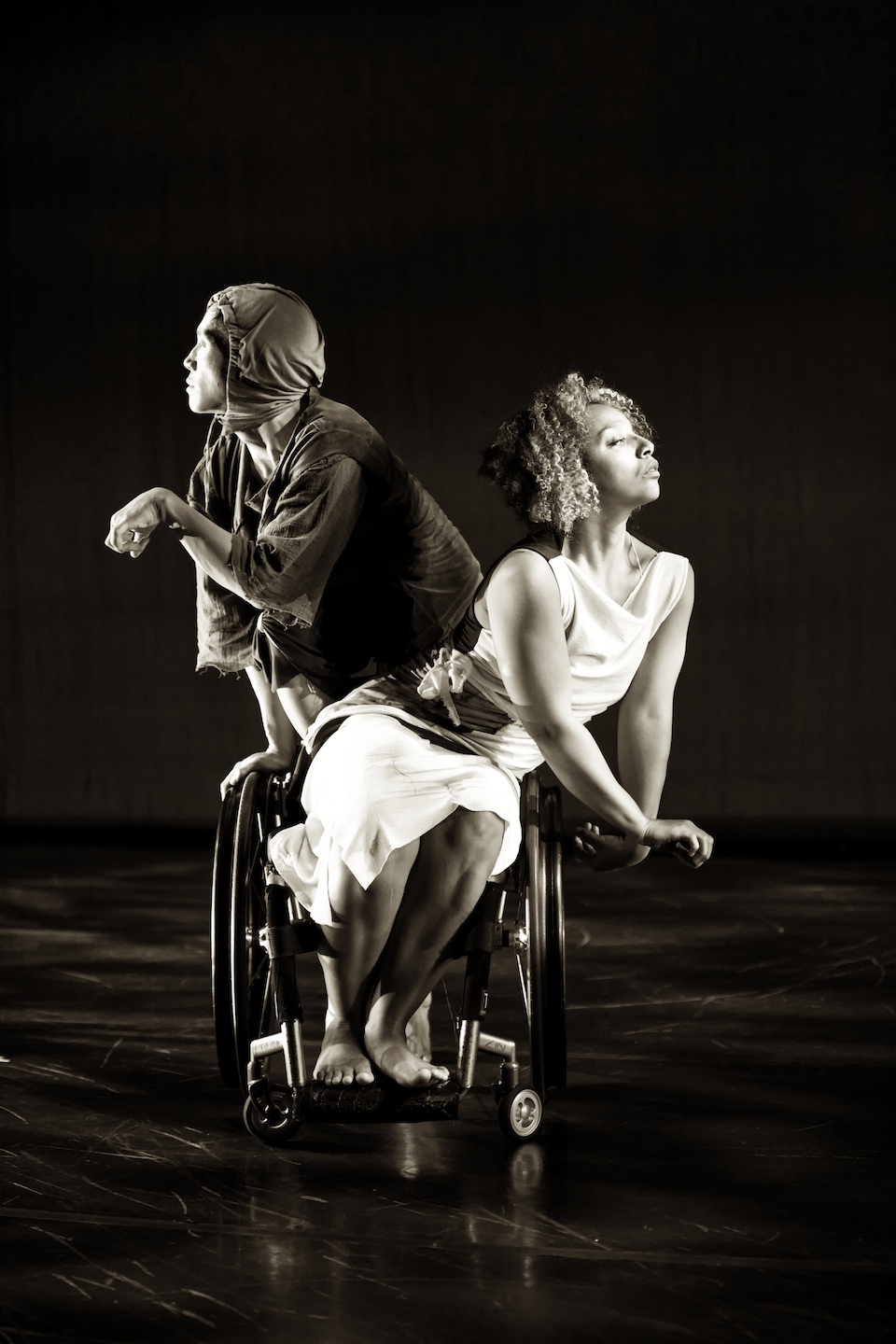 The performances are over, but somehow the collaboration between AXIS, inkBoat, Joan and Dohee has not left my life.  I still have an acute muscle memory for some of the newer moves and positions.  Some movements have become expressions in my daily life.  ODD has changed my understanding of performance:  I am accustomed to talking about process as the way in which we make pieces.  Then, there’s the actual performance.  Dancing before an audience starts a new process, of development and growth within the piece.  I am not used to that growth infusing my off-stage out-of-studio life.

Then again, if any piece were to resonate deeply in my body, it would have been ODD.  When I saw the pictures, the terrain of bodies and ground were familiar.  They were provocative realizations of a landscape I had first encountered studying Old Norse-Icelandic language and literature.  It is not surprising to me that I still find myself singing excerpts of Joan and Dohee’s music; their collaboration was not an accompaniment to the movement; it was as essential an element of our performative landscape as the movement.  I would listen to them, waiting, accelerating, slowing, hovering, driving until somehow, silently, we mutually recognized that we were ready to take the next step together.  I feel their music rising sometimes as I stretch out a hand; I smile at myself.  The performance is over, but the piece has not yet gone.

I am glad there’s something left.  Many of the creative processes I have been in have required improvisation; we have improvised movement and I have come to understand it as the movement takes root in my body.  This time, we often had a known concept to work from — realize bird, rock, find cloud in your movement.  I would often feel that I would never succeed.  I could create movement, but I was not always convinced that I could communicate.  Shinichi would say that these were lifelong endeavours–processes–but I could feel the approaching date of performance.  I did not know how I would actually do what I was supposed to.

I was supported by the process itself and the people in the process.  Our movement came in a variety of ways.  Sometimes, we would stare down at a painting or series of paintings.  We were not so much looking for inspiration but looking for things that appealed, intrigued, disgusted or, perhaps more simply, drew us in.  We would cross the boundary from the grey marley to the black marley.  In that clearly defined space, we would find shapes, movement, and states that were in many ways our readings of the paintings.  We worked often without music, but there were many days when Joan would sit and improvise with us.  Sometimes, we would dance first and then hear the music.  Sometimes, we would listen first and then dance.  My favourite moments were when we would just start together with no one knowing what would happen.

The process was both exhausting and exhilarating.  A high point was the first time I saw movement coalescing into the section we would later know as “nein.”  I felt as if we were looking at the surface of deep water: you can see the ripples, but only sense the presence of the deep.  A low point was the day when towards the end of rehearsal Shinichi asked us to find birds in our bodies.  I recall being so exhausted that I had nothing left to give.  “Bird?”  All I could see was flapping wings, so I flapped my arms.  (Yes, that is still a painful moment.)

As the performances drew near, I felt unready to move from “exploration” to “performance.”  I had not been able to find the kind of surety that I call “rehearsal:” For a piece that started so much with the terrain of the paintings, I wanted more time to find personal ground.  At the same time, though, I wanted to do this thing — to discover what else I had to learn from this complicated piece.  My own learning curve was steep, but I also felt that with each performance the work revealed a different aspect of itself.  There were different questions; I learned to feel OK with not  having any answers.  Now, several weeks later, I wish more than anything I could have been in the audience.