“The simplicity and rigor of the tiny gestures appeared to come from somewhere outside time. The force with which they repeatedly fell or threw themselves to the floor looked propelled by more than earthly gravity.”
-Rita Felciano, Dance View Times

A bare stage, stark lighting and sand set the scene. Fractional moments of time expand and extend to develop a gesture or scene into a thriving, singular world.

Crazy Cloud is inspired by the eccentric Zen Buddhist monk and poet Ikkyu (1394-1481). His name, Ikkyu, roughly translates into “One Pause,” signifying his moment of enlightenment that fell in the space between two crow calls. In contrast to this name, which conjures images of peace, is Ikkyu’s nickname: Crazy Cloud.

Any artistic and/or philosophical commitment to a movement can become politicized, asking incisive questions about society’s constructs and power bases.  Crazy Cloud pulls at the tension and borders between acceptable behavior and that which is illegitimate, invisible, gauche. The fabricated notions of black and white—or, respectively, the invisible and the mainstream, the illegitimate and the legitimate—and the complicit societal upkeep required to maintain these fictions, are core thematic threads in Crazy Cloud. 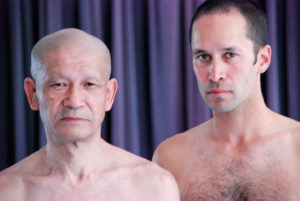 Directors/Choreographers
Crazy Cloud was originally choreographed by Shinichi Iova-Koga and Ko Murobushi (1947-2015). Ko, who was in his lifetime recognized in Japan as a leading inheritor of Hijikata’s original vision of Butoh, influenced the spare, “down to the bone” aesthetic of Crazy Cloud. Shinichi, whose performances reveal his own history with Butoh, brings a martial arts dynamic to the body, ready to wholeheartedly meet the ground in one moment and to build restraint in another.

Shinichi and Ko met first in 1996 in Rome, where both were performing on a shared program. The book entitled “Crow with no Mouth” by 15th century monk Ikkyu Sojun became the glue that united these two artists.

Dancers
The work tours in 2023/24 with I-Fen Lin (CH), Dana Iova-Koga (CH) and Shinichi Iova-Koga (CH). Integral to the development of the dance are the co-collaborators Sherwood Chen (FR) and Peiling Kao (USA).

Composers
The sound score has been crafted by the musicians Shahzad Ismaily, Carla Kihlstedt and Matthias Bossi. Working intimately together for years with inkBoat, this trio is known for creating textured dreamscapes, cobbled together from fractured memories and travelogues.

Bossi describes the paradoxical experience of sculpting the sound for Crazy Cloud:

“Recording the score for Crazy Cloud was like a waking dream in which a trusted ally tells you that everything is the right answer, but that the EVERYTHING must be distilled, essentialized. It represented the co-mingling of complete freedom, ultimate restraint, and unbridled bravery. A chance to record something so real, that you might smell it over the stereo. A chance to reveal something so honest and outside of yourself, that you might just die in the making of it.”

“More space,” Shinichi said, and then, again, “more space!” . . . until we were stretched and lengthened and until pulse and meter evaporated and we were left with just the bones of a sound. Breaking egg shells, the wind shield wipers of an old bus in a rain storm, snapping pencils and sticks, the in utero heartbeat of my daughter, a Transylvanian garden, crumpling paper, crows, bees, gongs . . . these are only a handful of things we experimented with in the process of making this score.”

What is Butoh?
“Though Butoh Dance evades definition, it’s generally agreed that it originates in 1960’s Japan, that it’s connected to counter-cultural movements and that it’s currently part of an international investigation/exploration into what dance can be. It has a particular taste, contrasting with Western contemporary dance, though sometimes the manifestations parallel each other. Butoh Dance changes and in this way, lives.”  ~Shinichi

Audio discussion (once at the MANCC page, click the icon with the music symbol)
http://www.mancc.org/artists/shinichi-iova-koga

In Memory of Ko Murobushi (1947-2015)
Ko was one of the best known and most acclaimed Butoh artists in the world and was recognized in Japan as a leading inheritor of Tatsumi Hijikata’s original vision of Butoh.  He studied with Hijikata in 1968, briefly ‘giving up’ dance to become a “Yamabushi” mountain monk. Coming back into society, he founded the Butoh-Group Dairakudakan together with Ushio Amagatsu, Akaji Maro and others. He created the Butoh-magazine, Hageshii Kisetsu (Violent Season), and founded a female Butoh Company, ARIADONE, for which he choreographed a number of pieces. Two years later, he founded an all-male Butoh-group: SEBI.  He also created his unit Ko&Edge Co. with three young Japanese dancers, with whom he presented Handsome Blue Sky at the JADE 2003 Hijikata Memorial in Japan.

“Hurling and butting, Murobushi shatters the traditional Western dance aesthetics. In the process, he shatters into pieces himself. From the rubbish rises up his body like a plate of steel as if an ancient body in a catacomb starts to tremor.”

“Have a good look–stop the breath, peel off the skin, and everybody ends up looking the same. No matter how long you live, the result is not altered. Cast off the notion that “I exist.” Entrust yourself to the windblown clouds, and do not wish to live forever.”
-Ikkyu

Sponsors/Support
The presentation and tour of Crazy Cloud was made possible by the New England Foundation for the Arts’ National Dance Project, with lead funding from the Doris Duke Charitable Foundation and additional funding from The Andrew W. Mellon Foundation.  Additional tour funding comes from Performing Arts Japan, a program of Japan Foundation.

The world premiere of Crazy Cloud  at San Francisco International Arts Festival 2010 was produced by inkBoat, the U.S./Japan Cultural Trade Network, Inc. and the San Francisco International Arts Festival, developed through a residency at the Maggie Allesee National Center for Choreography at The Florida State University and has been funded by the New England Foundation for the Arts’ National Dance Project (NDP) with generous support by the Doris Duke Charitable Foundation, the Ford Foundation, the Andrew W. Mellon Foundation, and the Community Connections Fund of the MetLife Foundation as well as National Endowment for the Arts, the San Francisco Arts Commission, Bernard Osher Foundation, William & Flora Hewlett Foundation and the Zellerbach Family Foundation, National Performance Network Creation Fund, and National Performance Network Forth Fund.

Crazy Cloud has been performed at these venues: