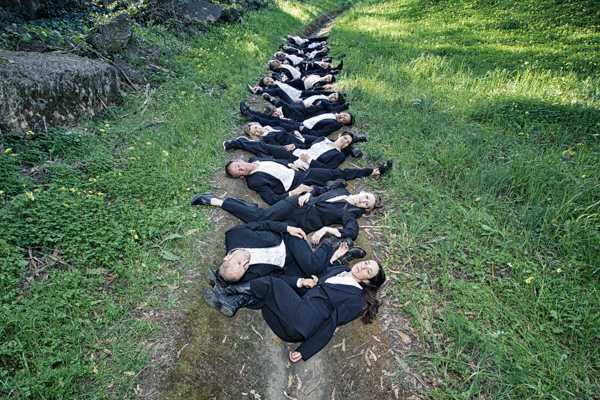 “Anna is the stone, the rock. This rock drops into the pool and we’re all the little ripples that move out from the impact of the rock on the surface of the water. There are also cousin rocks, those influenced by Anna, resulting in more splashing, more ripples.

How did this all begin?:

“Back in 2013, Wayne Hazzard and Michelle Lynch Reynolds approached me and asked if I would be willing, interested and available to create a performance work that honors Anna Halprin. And since that time there’s been a lot of talking, planning and dreaming. To honor somebody’s life is a big endeavor.  There’s no way to make a piece that encapsulates Anna Halprin. Just no way. What we CAN do is this: examine the intentions of her life, her effect, really, on the dance community… and on the art community in general. There are different Anna’s honestly. Where she is right now as she approaches age 95 is different from where she was when she was 30, 40, 50 years old, etc. etc. We don’t ignore the period of time in Anna’s life when she existed in a modern dance modality, learning steps, with which she got really disinterested in moving like someone else. Likewise, 95 Rituals will not look like Anna’s work.

What I’m thinking now is to create a situation in which the viewer must make choices about where to go, where to shift the eye and body when experiencing the Rituals. Therefore, anyone coming to two performances will never experience the same performance exactly the same way. Even if they really tried, they could not do it. Each performance has many modules, similar to Morton Subotnik’s “cell blocks”. Some modules remain consistent from performance to performance, and others get changed out each day.”

We are gathering resources from the community around Anna, inkBoat and Dancers’ Group through the vehicle of a “score card” on which contributors have the option to write out a full blown score (a la RSVP Cycles) with instructions, intentions, directions for sound and movement, ways of interacting with the audience… or maybe some rule breaking artist will just throw a blob of paint at the scorecard.  I don’t know, I can’t expect how it’s all going to come back to me. But these resources, delivered on a card, whether detailed or simple, go through a process of chance and selection, are combined or not. Are simple or complex. From mid-May until mid-June, we play and experiment with this material.  Then from mid-June until the grand finale in July, we refine, clarify, tear apart, weep, re-start, refine and clarify.”

“The first time I met Anna was very soon after my daughter Zoë was born. I had performed a solo, influenced by my baby daughter, reviewed by the San Francisco Chronicle. Anna read the review. She asked our mutual friend Sherwood to introduce us. So he did.

And so I found myself at Anna’s, meeting her for the first time in her home, having lunch. One question that Anna asked was about my process of making work. I proceeded to talk about how my collaborators, those who are in inkBoat, create through dialogue (as opposed to dictation).  She asked “Where did you learn to make work like that?” and I didn’t have a very good answer because I’ve been cobbling together my process from many different sources, not with a single teacher, or a single school or way of thinking. In that moment I had this feeling—you know, this is my first time to meet this lady, Anna Halprin—that the way in which I make work, even though I might not have known it, I’ve been influenced by this lady. And I can’t trace it.

After that lunch, she asked me to work with as her as Associate Director on Spirit of Place (another ONSITE project, by the way, in 2009). Her way to ask was to call me on the phone—this was when my wife Dana and daughter Zoë and I were living up in Petrolia, where we had established our dance studio six hours north of San Francisco—and she called me up and said, “Shinichi, all of my collaborators are dead, will you be my collaborator?” and so that’s how it began.

During this process I got to know more about Anna’s point of view, her relationship to space. How the space itself informs what we do, and how we draw attention to the space. Leonardo Da Vinci’s Vitruvian Man, a favorite image of Anna’s, guided group formations in the space.  Yet the meat of the performance rested on Anna’s patient observations, noticing the behavior of people who would come and go, naturally, in the space.

The third project we worked on together, in 2013, I was again asked to serve as the Associate Director for the re-making of Anna’s seminal work Parades and Changes, which was being recommissioned at the Berkeley Art Museum where it was originally performed. That process was a great insight into how she was working in the 1960’s, tracing that to where she is now.”